My love/hate relationship with Edith Templeton is continuing to evolve. First, I read her debut novel Summer in the Country (1950), discussed here, and absolutely loved it. Beyond love, really, I think it's a masterpiece. Then, I jumped to her quite (deservedly) forgotten fourth novel, This Charming Pastime, discussed here, and frankly rather loathed it. 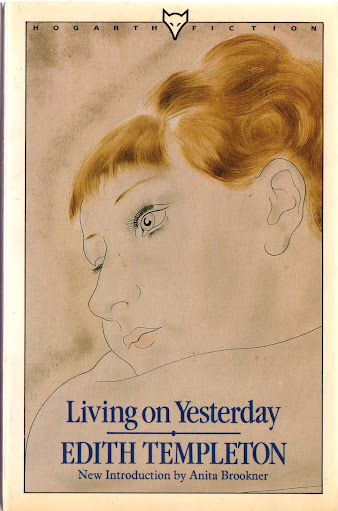 Now, with her second novel, Living on Yesterday, I am firmly back in the love camp. From the quite rustic Czech countryside of Summer in the Country, we arrive in this novel in the glittering world of Prague society, undoubtedly led (at least in her own mind) by the imposing and dominating Baroness Kreslov, whose quiet, awkward daughter Hedwig is but a pawn in the Baroness' attempts to marry her off to the penniless but prestigious Hungarian Count Szalay, who has arrived in Prague after an astonishing series adventures (at least, according to him), having been thought dead along with the rest of his family following political unrest in Hungary. Fortunately for Hedwig, however (and for us, the readers), Hedwig has learned considerably more from her mother's machinations than her passive demeanor reveals, and she sets in motion her own strategy to get exactly what she wants while apparently fulfilling the fondest wishes of the Baroness.

Also featuring prominently in the plot is the Baroness' brother Richard Marek, a widower with whom she has had a troubled relationship (to say the least—he occasionally manufactures mad tantrums to avoid seeing her) since he married, in her view, beneath him, and his friend Steffanie Smejkal, a former Court beauty who holds a sort of salon to which the returned-to-life Count Szalay makes himself known. This is not to mention some of the staff of these grand houses, who view their employers with considerable irony. 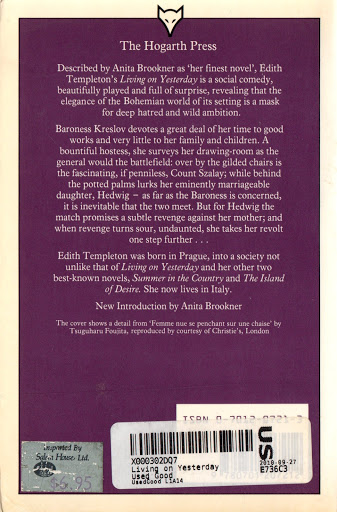 There are lots of lovely little tidbits here. I love this brief exchange between Richard and Steffanie:

'But what does he look like?' asked Richard Marek and helped himself to bread and butter and cherry jam.

Steffanie Smejkal put her cup down and made a vague gesture. 'He looks like a man,' she said. 'And because he looks like one, he thinks he is one.'

'But I often wished women were more like horses—you see your horse when you want to see it, and then you shut it up in the stable when you've had enough of it. You don't trail it with you, round to parties and all day long, if you see what I mean.'

But my favorite element are the subtle seethings that one could often miss if one didn't read carefully, as in this exchange between Hedwig and her mother:

'Well, we shan't put the world to rights. Not this evening, in any case. I am going upstairs now. I want to have a last look at the Stock Exchange bulletin.'

Hedwig got up as well. 'I am sorry, Mama,' she murmured and gave her mother a sidelong glance of hatred. The Baroness looked fondly into her face and kissed her on the forehead.

If it all sounds very much like an English society novel, spiked with breathtaking humor, spite, and dark motives, it's because it almost might be. If Muriel Spark or Barbara Pym had possessed a rather fiery Czech background, one might imagine them writing something like this. But even that doesn't quite capture the joyful and occasionally horrifying oddness here. There's a wonderful atmosphere and mood, with lots of brooding and plotting under the surface and few characters being exactly what they seem. And Hedwig's final victory was a delight, particularly as she is the only character here who might come within shouting distance of being "likable". 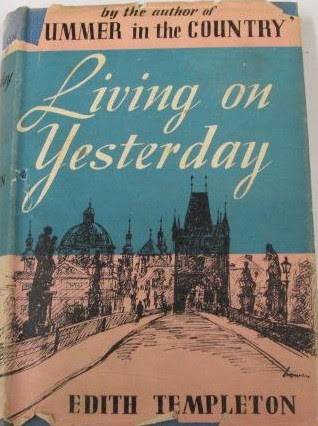 So, yes, Living on Yesterday can definitely be a mark in the Love column of my relations with Edith Templeton. But what about her third novel, The Island of Desire (1952), to which I immediately progressed?

What indeed. Well, here we seem to have a potent mix of Love and Hate.

It all starts out wonderfully well. This is, like Living on Yesterday, a sort of mother/daughter story, in which the tempestuous and promiscuous Mrs Kalny, with her long-suffering wealthy husband and her ongoing series of lovers, provides a powerful image for her naïve, insecure daughter Franciska to rebel against. When we meet her, Franciska is still at school, but already being forced into a rivalry with her mother, who has determined never to grow old and, most importantly, never to lose her desirability for men. Even the dressmaker treats her as an accessory of her mother:

Franciska would have liked to say something rude but nothing occurred to her. She left the room. Louise's words always annoyed her because they brought it home to her again and again that she merely existed in the maid's eyes as a sort ofliving dummy, created for the purpose of serving as a foil to her mother. 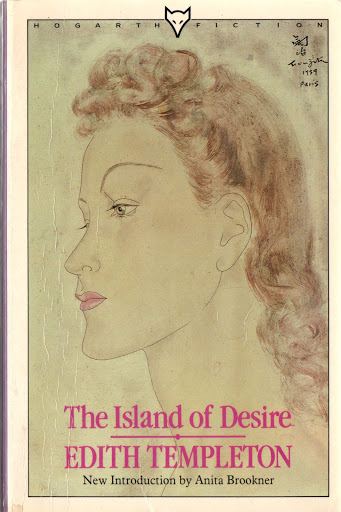 In her effort to rebel, Franciska is led into publishing a poem which reveals the luxurious conditions at her exclusive school, while the rest of the nation suffers under postwar austerity. She is expelled and soon after that forms a hasty marriage with the principal idea of escaping from her mother. But she is disappointed with love and with sex, particularly after all of the fuss her mother has always made about it:

It was, she felt, a case similar to the tale about the Emperor's new clothes: nobody has ever seen them because they do not exist, yet everyone goes through the motions of feeling their texture and admiring their cut, for fear of being thought stupid.

It's only while traveling with her finicky, repressed husband, when she meets an American man and his lover in a hotel, that she begins to suspect there is more to it. And this is where what started as another delightful Templeton comedy of manners started to go a bit awry for me. The portrayal of the passionate Mrs Kalny is often quite entertaining, and I love some of the pearls of wisdom she shares with Franciska, such as:

'She is quite wrong, you know, about what she said about men, that it's easy to imagine what's coming. One can never tell what a man is like till one has gone to bed with him. One can get a tremendous surprise sometimes in this way, good or bad. Remember this for life, Cissy.'

Mrs. Kalny had been very annoyed for a few minutes. 'Really, Cissy,' she had said, 'that sort of reading is stupid, because it gives you wrong ideas. You get things like: "and he picked her up in his arms and carried her to the bed." It's idiotic. In real life you'll damn well have to walk to the bed yourself.'

She really does have valid points in both instances… 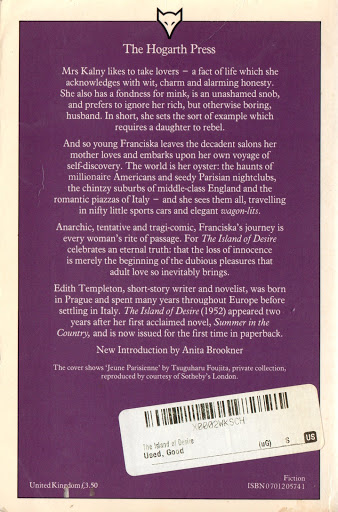 But once we shift our focus onto Franciska's sexual awakening, the novel becomes a bit more uncomfortable. It begins to seem that The Island of Desire is a transitional work for Templeton, from the joyful dark comedies she began with to the fantasies of sexual subjugation she wound up with.

And the final scene of the novel, in which Franciska's sexuality is apparently finally awakened with a vengeance when an official on the Orient Express virtually rapes her in her cabin and she suddenly (touchingly?) recognizes herself as her mother's daughter after all, is quite troubling in the age of #MeToo. I don't want to oversimplify the scene—Templeton is a truly literary author and deserves the benefit of the doubt, and there are undoubtedly multiple ways of reading and interpreting this scene. In addition, Anita Brookner, who wrote the intros to the 1980s Hogarth editions of these novels, clearly felt that Island was Templeton's best work. So every reader must decide for him- or her-self, as with any book. I can only say that for me it was quite offputting. 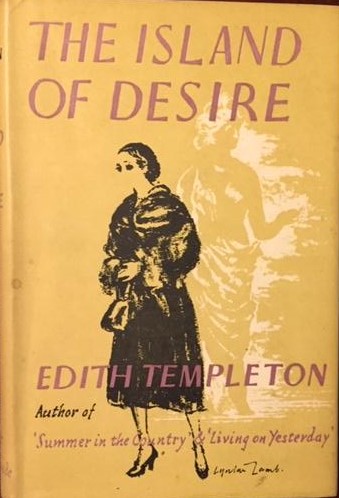 In some ways, then, The Island of Desire sums up my love/hate feelings for Templeton. It's odd that a woman of such intelligence and talent, so vividly on display in all of these novels, seems to have spent much of the rest of her life engaged in Fifty Shades of Grey­-esque fantasies. More power to her, of course, she had a right to explore her sexuality as everyone else does, and there's no reason I should be comfortable with it. But I can't help feeling that, unlike with many of my favorite authors, I would have had a challenging time chatting with Edith Templeton over tea!

Nevertheless, I do now at last have a copy of her Italian travel book, The Surprise of Cremona, and I am intrigued to see what I'll find there. Published in 1954, after the first three novels but before the very offputting This Charming Pastime, what type of personality will come through from her record of her travels in Italy? Despite my ambivalence, my love/hate impulses will surely drive me to find out.

Posted by Furrowed Middlebrow at 10:18 AM