A tale of two princesses

Here's a sort of dual preview of coming attractions—one author who will soon be added to my British list, and one who will appear on the new American list when it finally comes together. The fact that they both ended up princesses (by marriage to displaced Russian royals) is just the icing on the cake.

Sometimes I find myself wondering how it can take sooooooo long to research new authors and put together updates or, in the case of the work-in-progress American list, put together a whole new list.

But then I think of how much time I can waste—spend—unpacking the occasional confusion between two authors, or piecing together bits of information to try to form a complete picture of a long-forgotten writer's career. I do love having a mystery to unpack, though, which is no doubt why I get absorbed in the process and time loses its meaning.

This is what has been happening the past few days as I've obsessed over the Princesses Troubetzkoy.

I first added "Princess Paul Troubetzkoy" to my database at least a couple of years ago as a result of this blog post. The novel discussed therein, Half o' Clock in Mayfair (1938), sounded intriguing in a Gatsby-ish sort of way, though unless it's reprinted someday it's unlikely I'll ever actually hold a copy in my hand, since it has become vanishingly rare. I poked around a bit at that time, got confused by the fact that there seemed to be multiple Princesses Troubetzkoy running around, and left it for another time. After that, I apparently developed a phobia about her, because it's taken me this long to circle back around.

In fact, the blog post I started with had correctly identified the author of Half o' Clock in Mayfair, though I couldn't have proven it at the time. My intervening experience with Ancestry from tracing my own genealogy last year (perhaps I'll even post about that at some point, since among other things I found that not one but two of my relatives are honored in major British cathedrals that we actually visited on our last trip…) has now allowed me to trace Rhoda Muriel Boddam from birth (January 1898, baptized February 4, in Suffolk) to first marriage to James Somervell in 1917, on to her second marriage to Prince Paul Troubetzkoy, a noted artist and sculptor, in 1931, their residence at 53 St James Square, a dandy part of London, Troubetzkoy's death in 1938, and her own death, apparently as a result of a fall in her home, on 28 Oct 1948.

Somewhere along the way, she seems to have adapted a Marie or a Maire (or both, judging by all the alternate versions of her name listed in her probate record) as part of her name, though it's not listed on her birth record. Maire appears both in her probate record and in the Times notice of her death. This may help to explain why the British Library has her books listed under the name Mariya Trubetskaya, and why Paul's Wikipedia page names her as Muriel Marie Boddam, though it's unclear which is in fact the correct spelling or where the name came from in the first place.

Princess Paul's other novels (seven by my count, aside from the aforementioned Half o' Clock in Mayfair) seem to have become impossibly scarce as well, and reviews are not readily available either. The online Encyclopedia of Science Fiction mentions Exodus A.D.: A Warning to Civilians (1934), a collaboration with Futurist artist C. R. W. Nevison, and calls it "a Future War tale suffused with interbellum rancour, paranoia and despair about the survival of a civilized Europe" (see here), which certainly sounds cheery but doesn't tell me a lot. The only other review I found is of another 1934 novel, Gallows' Seed, a fairly positive review in the Bookman, but one that doesn't make me feel it's essential that I track down the book:

Since it is a recognised maxim that all's fair in love and novel-writing, there can be small objection to the fact that one of the central incidents in Princess Paul Troubetzkoy's new novel, "Gallows' Seed," is the murder of a betrayed girl by a young poultry-farmer who is anxious to press his suit in a more advantageous quarter. Life, as some of us may recollect, is occasionally apt to be like that; and the authoress, in setting her scene on the Dorset coast within sight of Portland, has heightened the drama. "Gallows' Seed" is interestingly written, and its characters are shrewdly imagined.

In the process of unearthing Princess Paul, I came across that other Princess Troubetzkoy who had initially confused me, and who, it turned out, came by her title by marrying none other than Paul Troubetzkoy's brother Pierre, also an artist. Amélie Louise Rives (23 Aug 1863 – 15 Jun 1945), despite her French-sounding name (her aunt Amélie, for whom she was named, was, according to Wikipedia, a goddaughter of French Queen Marie-Amélie), was American through and through, right down to being a goddaughter of Confederate Civil War General Robert E. Lee, and was herself born in Virginia and spent much of her childhood in Alabama. 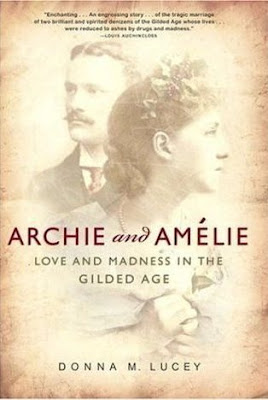 But in Rives' case, it seems to have been her first marriage, rather than the one which gave her a royal title, that provides the meatiest details for gossip. She married John Armstrong Chanler, an heir of the vast estate of John Jacob Astor, in 1888, and the resulting dramas are depicted in Archie and Amélie: Love and Madness in the Gilded Age (2006), by Donna M. Lucey. The publisher's blurb describes the couple as the F. Scott and Zelda Fitzgerald of their day, and some evidence of their escapades may be found in her 1915 novel Shadows of Flames, which is described in one source as one of the earliest literary accounts of drug addiction (perhaps they hadn't heard of De Quincey nearly a century before?), apparently drawn from her own experiences. They remained married only seven years, and only a few months after their divorce, Amélie married Pierre Troubetzkoy (having been introduced by no lesser figure than Oscar Wilde). That marriage does not yet appear to have warranted a book…

On a trivial side note—simply because I came across the detail and what else am I to do with it?—my forthcoming American list will also include a cousin of Amélie's, Hallie Erminie Rives, whose biggest claim to fame seems to be that her 1897 novel Smoking Flax caused controversy by taking a more or less affirmative position on the issue of lynching. Ah, what a delightful person she must have been…
Posted by Furrowed Middlebrow at 4:50 AM