Ah, the warm glow of new book acquisition.  Though in this case, of course, I mean the glow of new-to-me book acquisition, which is even better really, since for me books are even more glow-inducing when one happens across them unexpectedly and at bargain prices than they are when they are pristine and crisp and smell of fresh ink and paper. (That glow is pretty warm too, but more expensive to acquire and necessarily more premeditated.)

At any rate, as most of you know by know from all the anticipatory references to it in the past week, last night was the spring version of our semiannual Friends of the San Francisco Public Library Big Book Sale, and I rushed home afterward and promptly (well, after a good dinner and a lot of ogling of the books) started scanning covers so I could share with you far more about my "new" books than you were ever likely to want to know.  It has taken me a couple of days to put it all together, but here it is.

First, although I've shared this before and it looks pretty much the same every year—even down to the lovely Bay Area weather—a glimpse of the line outside the sale: 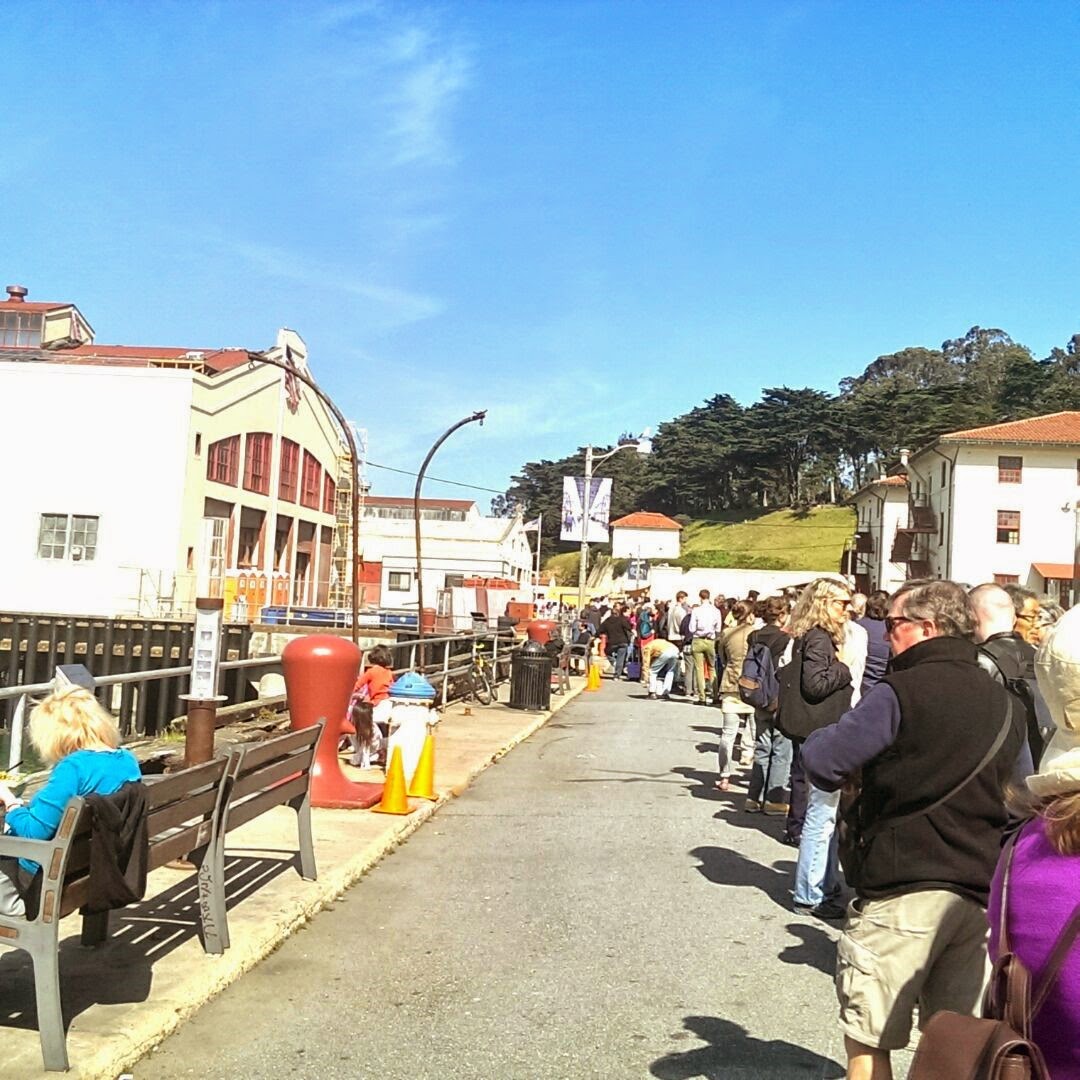 And, also much the same as always, the view as we entered the lovely Fort Mason Center space: 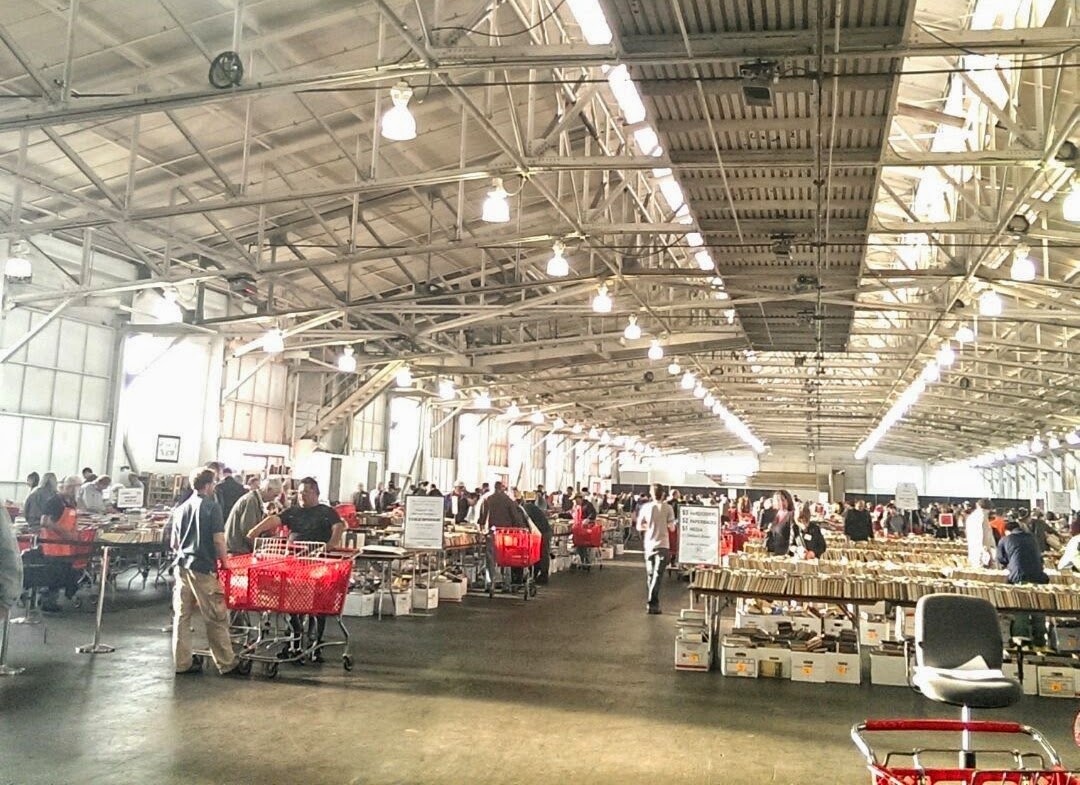 Andy and I made our usual bee-line to those first few tables on the right of the picture, loaded down with fiction. These days, I mostly bypass the paperback fiction tables.  Now that my interests have led me deeper and deeper into obscurity, I instead dash to the hardcover tables, where I am far more likely to find the dusty, yellowed tomes by women writers, many long forgotten and never reprinted in paperback to begin with. 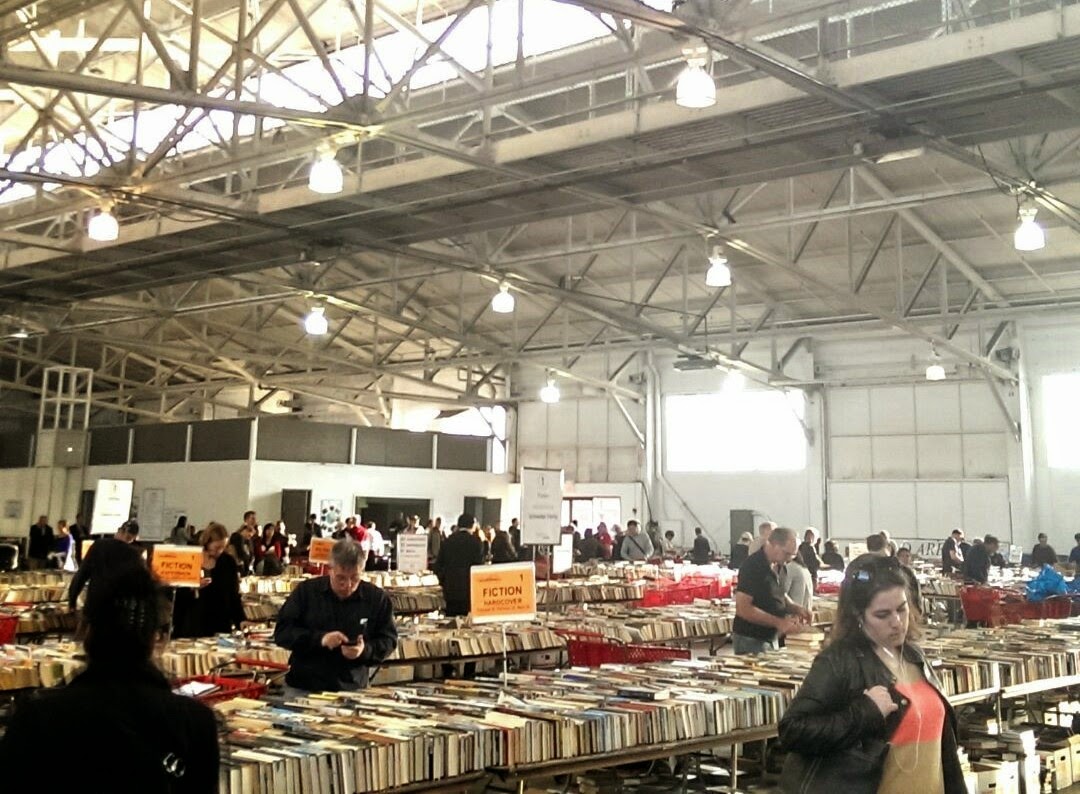 Some years at the book sale are better than others.  This year, I nabbed one of my best finds within 15 seconds, a new record.  Although I haven't reviewed it here, I have certainly mentioned my love for Margery Sharp's The Stone of Chastity, a zany novel about a stepping stone across a river upon which, supposedly, no impure or unfaithful woman can step without slipping and falling into the water. At a previous book sale, I found an old Tower Books reprint, a cheap mass-market edition, but still with a cute dustcover.  But that version can hardly hold a candle to a first U.S. edition from 1940, with, not a dustcover, but a gorgeous and amazingly well-preserved image on the cover itself:

Sharp's sales in the U.S. must have been significant to have warranted such a lovely edition, and this copy is as pristine as if I'd picked it up on its day of release.  I even have to share an image of the spine, also illustrated:

I was off to a great start, and by the end of the evening, I had come across several other great finds, which—although perhaps few other buyers would have given them a second glance—are coveted finds for me.  Two of them were naked (i.e. no dustcovers) but are no less desirable for that.

Susan Ertz was a bestseller in her day, but not a lot of people read her these days and I'm looking forward to sampling her work with Madame Claire from 1923 in a quite well-preserved American edition.  Also naked but also well-preserved is my "new" copy of Helen Ashton's The Half-Crown House from 1956.  I've actually read one Helen Ashton—probably one of her least-read works, a WWII hospital drama called Yeoman's Hospital—and enjoyed it, but somehow I've never gotten around to Bricks and Mortar, the one that is actually in print and readily available from Persephone.  Obviously, I just love the hard-to-find ones!

I've never read anything by Honor Tracy, best known for her humorous novels about Anglo-Irish culture clashes and for some works of humorous travel.  No idea what to expect from her, but I couldn't pass up a nice hardcover of her 1963 novel The First Day of Friday.

I always get excited when books have author photos and bios for writers who aren't very widely known, and this one doesn't disappoint:

But Honor Tracy is really only moderately obscure.  What would be really exciting would be a gloriously intact dustcover, author photo, and informative bio for an author I know almost nothing about (and originally had listed twice on my Overwhelming List, because I had no clue her pseudonym and her real name were one and the same person).  Wouldn't that be cool?  Well, it doesn't get too much more obscure than Margaret Mackie Morrison, who published under her real name as well as her pseudonym, March Cost:

Previously, I had a tiny, grainy photo of Morrison, but now:

And previously I knew almost nothing about her, but now I have a rather decent publisher bio for her:

Though now I wonder who else is part of the "well-known literary family in the West of Scotland"?  Hmmm.  But anyway, apart from the research benefit of this acquisition, it actually sounds kind of intriguing:

And the fact that this was a Book-of-the-Month Club selection only highlights the fact that even the fame and success of being a book club selectee doesn't guarantee longevity.  An amazing array of forgotten women on my list were Book-of-the-Month Club selectees in their day.  (One of my most coveted wishes, by the way, is a full list of selections of BOMC and Book Society and other such clubs. Does anyone know if such a thing exists?)  And of course, intriguing descriptions such as this one can be deceptive, so I will be reporting on it here soon...

And finally, this one isn't particularly rare or obscure, but somehow I had missed out on it.  Artist Gwen Raverat's memoir of her late Victorian childhood, Period Piece (1952), looks to be quite entertaining.  She was the granddaughter of Charles Darwin and grew up in the scholarly environs of Cambridge, and I have already been thoroughly charmed by a glimpse through the introduction.

Of course, in addition to exciting unexpected finds, the book sale is always a good place to expand one's collections of old favorites.  This was an extraordinary year for Elizabeth Cadell titles, all of them found by the incomparable Andy when we divided to conquer.

I also fleshed out my mystery collection a bit with two titles by Christianna Brand—Cat and Mouse (1950) and her classic WWII-era thriller, Green for Danger (1944)...

...and two by my new favorite Patricia Moyes—The Coconut Killings (1966, originally To Kill a Coconut) and The Curious Affair of the Third Dog (1973).  Although dog-racing isn't an atmosphere that seems very enticing to me, I'll trust that Moyes' charming style and loveable main characters will carry me through.

I picked up two Georgette Heyer novels—Powder and Patch (1923, originally The Transformation of Philip Jettan) and The Foundling (1948)—in rather nice Book-of-the-Month Club hardcover editions, and I will now be able to replace my tattered old Virago edition of Gladys Mitchell's The Rising of the Moon with an enticing hardcover edition.


But more exciting still was my one (intentional) American acquisition.  I don't think I've mentioned Mary Lasswell here before, but she's one of my favorite Americans.  She's what is sometimes condescendingly referred to as a "regional humorist," best known for her series of six novels (1942-1962) following the exploits of three beer-swilling middle-aged women who make their home together in the San Diego junkyard one of them owns.  They're a slightly bawdy, rather tipsy, broadly funny, and completely life-affirming, rollicking good time—even if they're not British!  I came across Lasswell's debut, Suds in Your Eye (1942), at a bookshop a few years ago and promptly borrowed the rest from libraries, but I'm always on the lookout for copies to grace my own shelves.  At last year's Big Book Sale, I came across the fifth, Tooner Schooner (1953), and this year, happily, I've added the fourth, Wait for the Wagon (1951), complete with a well-preserved dustcover.

Lasswell's books are also entertainingly illustrated, as you can see from the endpaper below.  But what made me laugh at this was the notation and price in the upper right-hand corner: "Rare 50¢".  I guess for that bookseller rarity didn't add much value!


And finally, a couple of question marks, and maybe you smart, incredibly well-read folks can help me out.  I found a charming original Jonathan Cape edition of Beverley Nichols' 1932 novel Evensong.  I know I've heard of Nichols in relation to his humorous gardening books, but I know nothing whatsoever about his novels.  I couldn't resist picking it up, but is it something you think I'll enjoy?

And I've always meant to read one of the handful of mysteries written by Irish author Eilís Dillon, but what I came across the other night was one of her children's books, A Herd of Deer (1969).  Glancing through it, it seemed intriguing, though I know nothing about it.  Have any of you read it?

And while I was at it, I picked up another children's book. Although I haven't yet been seduced by all the many horse stories that are out there, I know that a lot of readers are devoted to them, so when I saw one I didn't recognize, I figured that if nothing else I could find it a good home.

It turns out Young is an American writer, which perhaps makes it even more likely I will put the book up for adoption, but are any of you familiar with the book or with Young's work?  Is this something I simply must read?  Or is it something one of you simply must have for your own collection should I decide it's only paying a short visit to my bookcase?

And that's that: more than you could ever possibly have wanted to know about my book shopping!  Although there were some particularly exciting finds, I actually showed admirable restraint—I only acquired 25 books in all this year, which pales by comparison to years when I came home dragging as many as 50...
Posted by Furrowed Middlebrow at 6:00 PM